With only a 5th grade education, Luis Marcos is a Mayan immigrant from Guatemala who is mostly self-taught. He is now the executive director of Communidad Maya Pixan Ixim (CMPI), an Omaha nonprofit that was created to promote the health and wellbeing of Mayans in ways that are consistent with their worldview, spirituality, and system of social organization. 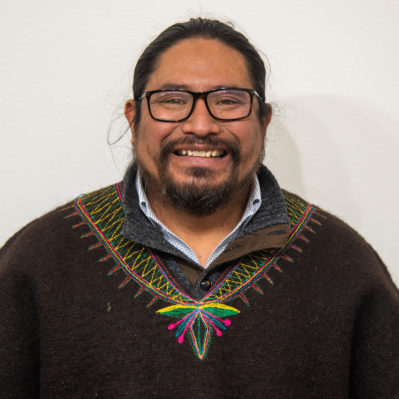 “I do a lot of reading and reflecting on life and how history informs what kind of future we will have,” Marcos said.

He is dedicated to sharing Mayan’s history and culture with Nebraskans, not to awaken shame or guilt in the learner, but to build a common understanding and to create something better for our community.

“Pixan Ixim emerges from the understanding that the Maya is a very sophisticated civilization. People say we disappeared, but we have never disappeared. We have always been here,” Marcos said. “It’s about understanding the history of our dehumanization, our spirituality, and our worldview, the wars, cycles of violence, policies of extermination, exclusion, and forced assimilation of states on our traditional homeland.”

The small organization began in 2007 with grassroots programming that included ESL classes, driver’s education, a citizenship program, and health initiatives. They also teach Nebraskans about Mayan culture and identity, which is based in a sophisticated civilization that has been around for thousands of years.

“We are not Latino or Hispanic. We are Maya,” Marcos said. “It’s not a rejection of anybody, just to say that we are not who you are. Latino and Hispanic people embrace us for who we are when they learn that.”

In Omaha, Marcos says CMPI has found room for Mayan experiences to be heard.

“Originally when I said I wanted to apply for the Futuro Latino Fund, I had to explain that our organization is for people who come from south of the border and we share a geographic area with Latino and Hispanic people. The Omaha Community Foundation understood this and the Latinos on the advisory committee were very supportive of funding our organization.”

Marcos pointed out why the census advocacy they do is so important. Previously, the census only categorized Latino or Hispanic, with no designation for indigenous peoples.

“We are not Latino or Hispanic. We are Maya.”
Luis Marcos, executive director of Communidad Maya Pixan Ixim

However, due to advocacy from indigenous groups, the 2020 census added an ethnicity category that allows indigenous people to identify as “American Indians or Alaska Native such as Navajo Nation, Blackfeet Tribe, Mayan, Aztec, Native Village of Barrow Inupiat Traditional Government, Nome Eskimo Community.” 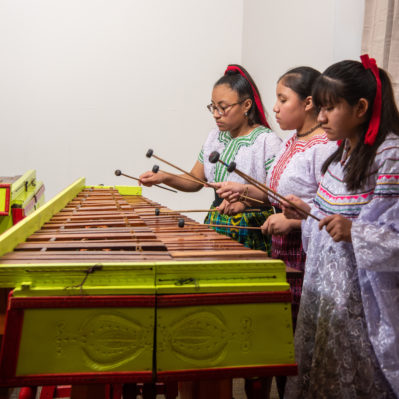 “It is a huge accomplishment to allow our community to say we are here, with the hopes of keeping track of that,” Marcos said. “We don’t know what will be done with the information, but we will maximize that window of opportunity — even if it’s just a window to look out.”

A Shift to Human Rights

In 2014, the Mayan community in Omaha was targeted by immigration authorities and two key leaders of CMPI were arrested and deported.

“At the time, we had nothing to say to this powerful government entity, but then after a while, we built up courage and said we cannot continue like this.” Marcos said.

At that time, the focus of CMPIs work shifted. They paused other programming to create a human rights program. They invited Mayan leaders to come and meet with the Omaha Tribe of Nebraska. From there, Marcos became the Mayan ambassador to the Omaha Tribe of Nebraska. CMPI hopes that in the future they will be able to provide visas for Mayans and are advocating for legislative support in Nebraska.

Building a Strong Base

Around this time, CMPI began speaking with the Omaha Community Foundation.

“OCF asked us what our needs were, and we explained that we wanted to start a community center where we could promote Mayan arts and culture, economic development, and health,” Marcos said. “The Foundation told us that now was an important time to build a strong organizational infrastructure so that donors can come in to support that vision.”

The Foundation encouraged CMPI to apply for a Community Interest Fund grant to support the capacity building work they needed to do.

“At the time, I had no idea what organizational infrastructure was or how I thought I could make it strong,” Marcos said. “I thought it was strong.”

After reflecting for a couple of months, CMPI decided they wanted to focus on capacity building for three years.

Once funding was granted, CMPI implemented a roadmap for developing capacity over the three years in the following areas:

“All of this had to be done in ways that are consistent with our spirituality and the United Nations Declaration of Rights of Indigenous People,” Marcos said.

By 2020, a board had been built, and a plan had been made. The organization was ready to fly. But then COVID-19 hit. Having to pause programming due to the pandemic, Marcos says they felt cornered.

“We were sitting on our hands again,” he said, and the Mayan community was struggling financially.

CMPI began helping the Mayan community to get through the pandemic by connecting people to resources and services. They were also able to secure funding for emergency services and rental assistance. They have also retrofitted the CMPI community center to do digital organizing and presentations.

“Pixan Ixim emerges from the understanding that the Maya is a very sophisticated civilization. People say we disappeared, but we have never disappeared. We have always been here.”
Luis Marcos, executive director of Communidad Maya Pixan Ixim

They made use of the time to get involved with Creighton University and its social entrepreneurship program. CMPI is planning to implement an economic development program where they will purchase 400 to 600 acres of land where regenerative agriculture can be practiced in the ways that Mayan elders farmed. 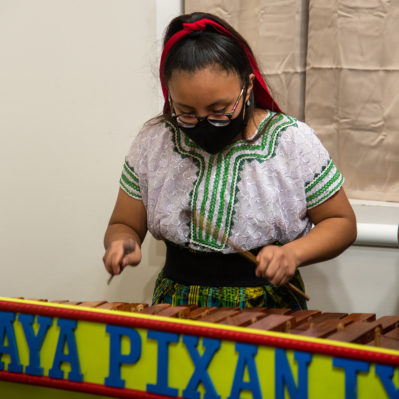 CMPI said that economic development will support their human rights and immigration programming, creating “economic opportunity for our peoples, so they don’t have to risk their lives to come here.”

“We want people to travel the world but for cultural enrichment not because of poverty,” Marcos said. “We are implementing this economic program here in Nebraska so we can contribute to the economic vibrancy of the state. Not just us, but the wider community. We want our people to economically thrive.”

Growing Into Fund for Omaha and Beyond

By the time CMPI’s Community Interest Fund participation ended, the nonprofit had grown and become more competitive for the process. In 2019, CMPI received $15,765 from the Fund for Omaha—a progression into another level of local funding.

In 2020, Marcos also participated in the Foundation’s Nonprofit Capacity Building Program on behalf of CMPI. Additionally, CMPI received funding from several other local foundations and began to develop relationships with national foundations.

“We are now positioned to go to other foundations for grants,” Marcos said. “We feel very comfortable where we are.”

Programs DESIGNED TO GROW YOUR NONPROFIT

The Donor Services team at the Omaha Community Foundation is here to make giving through your fund as simple and meaningful as possible. It’s an experienced and knowledgeable team, committed […]