Is Omaha Pedestrian, Bike Friendly? With Better Infrastructure, It Could Be

Omaha’s trails are mostly used for recreation, not transportation. That’s partly because the city lacks the infrastructure to reach everyday destinations by walking or biking. Julie Harris, Executive Director of Bike Walk Nebraska, wants to change this.

“We’re seeing rider satisfaction increase, and businesses, neighborhood associations, and downtown associations are very happy,” Harris said. “There have been challenges, but overall, it’s been amazing.”

In the Omaha-Council Bluffs area biking and walking to work have remained consistently low over the last 10 years. A 2019 ConnectGO survey found that 65% of respondents did not feel safe cycling for transportation.

This falls in line with a survey of the 50 largest metros in the United States. Findings revealed 60%—the majority of respondents—identified as interested but concerned, meaning they would bike if they felt safer.

“These are the people who say, ‘I wish I could do that, but there’s just no way—it’s not safe.’ We need to design our bike facilities to attract those riders,” Harris said. “Just putting a line of paint on the ground is not going to get someone to ride their bike down Leavenworth. But a protected lane makes a difference for those people who are concerned.”

Her goal is to get more of these protected lanes throughout the city, connecting both north-south corridors and east-west corridors. Another way of increasing safety for pedestrians and cyclists is trails.

Manne Cook is the lead for Spark CDI’s North Omaha Trail Project, a two-mile trail that is currently under construction and will go from 31st and Ames Avenue to 24th and Lake Street. Brush removal and concrete work are in progress with murals and artwork to be added along the way.

“You’ll be able to ride from downtown Council Bluffs to North Omaha, just short of Benson at the 40th and Hamilton area,” Cook said. “After that, there is exponential growth to the trail system.”

Cook worked in city planning before joining Spark CDI as an Urban Development Manager. He is also a board member for Mode Shift Omaha, an organization that advocates for more walkability and bike-ability.

You may see Mode Shift members at city council meetings, hosting bike rides and coffee chats, and contributing to education and news on behalf of cyclists and pedestrians. Cook is also the founder of Just Ride, a local bicycle club committed to mobility justice. It was established on the belief that people have the right to move through public spaces without the fear of violence, harm, or oppression.

In addition to offering more transportation options, people simply enjoy trails—they improve the quality of life and are something people want to live by. Cook pointed out that these types of lifestyle improvements are crucial for the city to stay competitive and attract talent.

“So much good is happening right now, and it’s going to keep progressing in a positive way,” Cook said. “A lot of people are going to be surprised in the next couple of years by the improvements that are happening and continuing to happen locally. We need to keep thinking about how to make it sustainable and scalable.”

The Harney Street bike lanes are intended to help expand those east-west connections that could draw more commuter cyclists. But to make a larger impact, Harris said the city needs to commit to planning infrastructure for bicyclists and pedestrians when installing or reconstructing roads and building bridges and neighborhoods.

In fact, Harris is advocating for a relatively easy investment into east-west connections right now.

“Look at West Maple Road,” she said. “It’s two lanes in each direction and there is talk about adding a third lane in each direction. Think of the resources we could save if instead of adding a third lane for cars, we put in sidewalks and a bike lane. Metro will not put a bus line on West Maple if they have to dump people into a ditch; adding sidewalks would draw the bus lines to that area. This is an opportunity to activate people to ride public transit, bike, and walk.”

Harris added that another car lane will only increase the number of cars using the road. Congestion may decrease at first, she said, but it will draw demand and, eventually, the traffic problem will become worse than it is now.

“What we need is a better network of protected, separated bike lanes,” she said. “Until we have a network, we won’t be able to see the true benefit of biking.”

“Don’t invest in highways,” he said. “Nobody goes and lives somewhere because of a highway.”

Cook offered a reminder that people within the community have a say in what happens, and residents and nonprofits are increasing the pressure and speaking out about the needs.

A fully developed network of options for people will take a lot of time and resources. But it’s not something the city has to do all at once, and some of these measures come at a minimal cost if they’re done during construction.

“We can make little trail connections here and there,” Harris said. “When we have a new street built or one reconstructed, we make the decision to include safe bike accesses and sidewalks. They knit a city together and make connectivity happen.”

Public Health is the Best Investment We Can Make Now

“This is a moment in time when we are living toward the end of the pandemic and a lot of social change,” he said. “All this change has happened, but in ten years are we going to look back and wonder if we dropped the ball?”

He worries Omaha will miss this window of opportunity. He wants elected officials to educate themselves on the issue, stop defaulting to what’s already been done, and act with compassion and intentionality.

Consider supporting nonprofits that are working to improve Omaha’s transportation.

Follow Just Ride if you want to have fun riding your bike with others while advocating for freedom from violence, harm, and oppression in public spaces.

Check out The Landscape 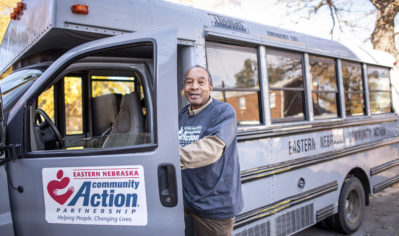 Key Points The most equitable transportation systems offer multiple options for transit and are designed for everyone in a community. Cars are overused and local spending on public transit is […]

Especially over the last few years as social consciousness has increased, many of your clients may be more interested in how they can make a difference through their philanthropic activities, […]